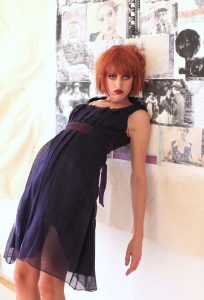 Sarah Demeestere is an international artist who works both in France and the USA. Sarah believes it is through art that humanity can evolve in the most direct and enjoyable way, art being the purest form of transformation.

In her series of collages, Sarah attempts to bring oneness to all things separate. “I see collages as a montage of images, like in a film, each generating a new meaning when superimposed or juxtaposed to another, and creating one story together. I am a collage of the French and the American culture and it is through art that I became whole”.

In her photographic work, Sarah’s interest is in bringing out the beauty of her subjects, whether it be people, animals, nature or cities. “I can’t help but see the purity and potential in all things – this is what propels me to capture them with the camera“.

Sarah’s sense of esthetics was genetically and culturally passed down to her through her French heritage. And then matured in her later years at the Ecole Nationale des Beaux-Arts, at the Université Sorbonne in Paris and Otis College in Los Angeles. America taught her scale, confidence and action, essential qualities to creating anything. Her continuous return trips from America to France have made her work a bi-coastal quilt of images, drawing mostly from the uniting world of film and her travels.